PBS is one of those oddball channels you watched as a kid. As you grew up- found things like FamilyGuy, the Simpsons and YouTube maybe you wondered how PBS continues to exist, or more likely- complete forgot about things like BigBird. In the blink of an eye your first child turned 2 and after watching Cars (the movie) for the 50th time [this week] you discover the PBSKids.org iPad app.

Not only have a video app, but a games app too!? SCORE! A little voice inside your brain jumps for joy! “Finally- something that’s free, won’t try to up-sell my 2 year old and is KID FRIENDLY!“. As your child explores the app you are astonished how much content they have- everything from WildKratts to Cat in the Hat. Best of all- fresh new content keeps coming!

You add up all the money you’ve spent on movies, games, apps and realize- you’re not a PBS member. Why is that? Well- it’s free, YOU’RE CHEAP and hey- our “tax dollars already subsidize it, right?”. That balance between what we’re willing to pay for and what’s free bends and shifts in our head. We wonder, if I’m going to pay for this, what am I getting out of it? I mean, BESIDES the OBVIOUS free cycles while your child is actually engaging with something other than The Wiggles & other titles.

Finally, one day you’re surfing around YouTube and discover PBS has multiple channels. It sticks out at you because your kids love “pbskids dot org” (as my 4 year old likes to say). You scan around through the noise and come across the channel “PBS SpaceTime”. Your brain comes to a screeching halt. WTF? 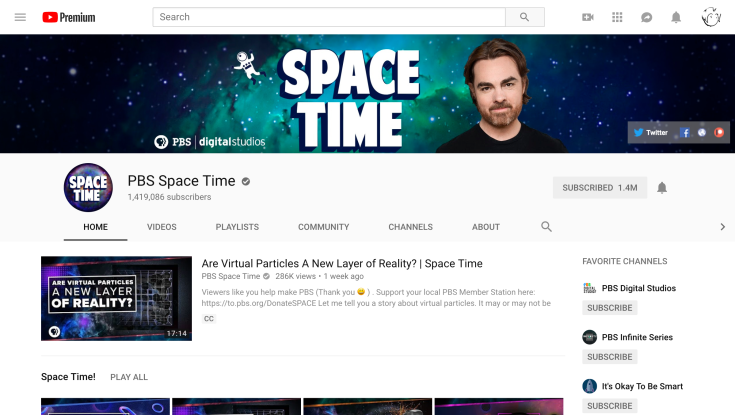 Let’s back up a bit. For the last year or so I’ve had a fascination with the various physics channels on YouTube. I’ve blundered that time trying to wrap my head around things like Space, Time, String Theory, Quantum Theory and Dark Energy (yes, it’s really a thing!). The problem is, most of these “lectures” come as just that- lectures. Hours and hours of PHDs nerding out about particle accelerators, black holes and time as a dimension.

If you want to blow your brain up a bit- check out the Royal Institution’s YouTube channel. RI has a great history of speakers dating back to some of the greats. Physics as you learned it in the 80s, 90s and early 2000s is one thing, but the things we’ve observed in the past 15 years alone will completely blow your mind. If you don’t believe in they existence God [or at-least something bigger than yourself], you just might shortly there after.

But who has time for ~2 hour lectures on particle physics, space time relationships and quantum mechanics? This piece started by talking about my kids and trying to keep them entertained.  Therein lies the beauty of what PBS SpaceTime is trying to solve for. It recognized it’s core audience as kids, but expanded a complement to both the kids as they grow up and their parents who have few precious cycles to try and keep up. Parents who want to learn, but rarely have the time to do so.

They’ve managed to break complex physics into nice ~10 minute chunks. This simple pattern enables kids and teens to gain exposure to complex topics like DarkEnergy (again, yes.. it’s a thing!) and String Theory in fun and interesting ways. It treats the overall topics like an episodic set of investments, recognizing most humans will need to break their brains [SLOWLY] in order to absorb it.

Most adults only have negative cycles in the day, such that trying to learn new things ends up costing something else. You want me to watch a 1.5hr lecture on String Theory? NFW. It’ll take me ~30min to figure out if it’s interesting or not and that’s 45min of my life I’LL NEVER GET BACK. Forget String Theory; I have poopie diapers to change.

It’s almost as if; PBS SpaceTime is ACTIVELY HACKING YOUR BRAIN. You may only have negative cycles in your life- but the complex topics they cover can ONLY be absorbed ~10min at a time. Any more than that and you’re likely to throw up, literally. What we’ve found with things like String Theory, Dark Energy, and the Quantum world is, you have to break down some of the fundamental things you’ve learned over your life in order to re-shape what we’re learning about the real world.

Your brain brakes if you try to think about the fact that the observable universe is ~90billion light years “across”. Your brain can’t wrap itself around the fact that time is a dimension and “slows down” in a black hole (whatever that means). It’s easier to stick your head in the sand when you come across things we can’t yet explain (wtf is a gravity wave anyway?).

That’s because your brain is plastic and needs time to re-shape around concepts it once believed to be true. It tends to abstract complex topics and ignore what’s beneath them, if only so you can still go about your day. So, how can we give you the breadcrumbs so that ten years from now… you [and more importantly, your kids] can?

We’re gonna need those little brains up to speed if we’re ever gonna build that Dark Matter Engine. If you’re not paying for PBS.. maybe you should be? 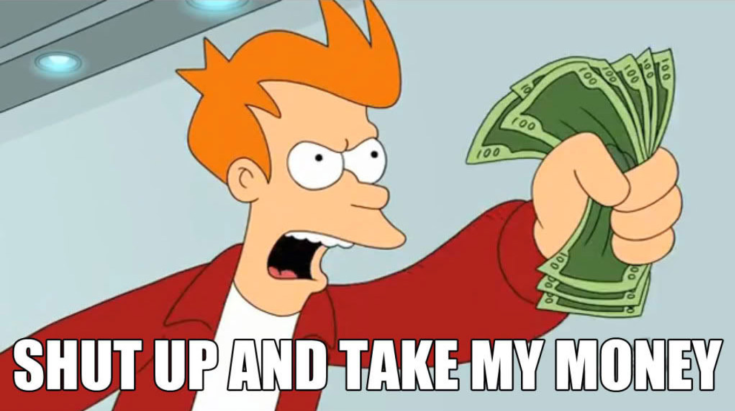